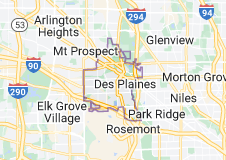 Des Plaines is a city in Cook County, Illinois, United States. Its population was 58,364 at the 2010 census. The city is a suburb of Chicago and is located just north of O’Hare International Airport. It is situated on and is named after the Des Plaines River, which runs through the city just east of its downtown area.